BOSTON SCIENTIFIC LOSES ITS FIRST FEDERAL TRIAL AND IS ORDERED BY A FLORIDA JURY TO PAY FOUR VICTIMS OF ITS VAGINAL MESH PRODUCTS A TOTAL OF $26.7 MILLION 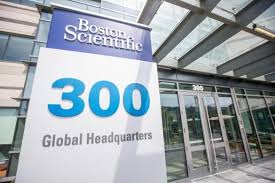 Boston Scientific Corp. (BSX) must pay $26.7 million to a group of four women who blamed the company‚Äôs vaginal inserts for injuring them, a jury concluded in the first federal trial of claims over the devices.

Jurors in federal court in Miami deliberated about four hours yesterday before finding Boston Scientific officials defectively designed their Pinnacle pelvic-organ implants and failed to properly warn doctors and their patients about the device‚Äôs risks, Joseph Osborne, a lawyer for one of the women, said in an interview.

The verdict is the first in a federal case against Boston Scientific over the Pinnacle inserts and the first to combine more than one plaintiff‚Äôs claims.

‚ÄúBoston Scientific better start giving serious consideration to doing a global settlement of these vaginal mesh cases,‚Äù Carl Tobias, who teaches product-liability law at the University of Richmondin Virginia, said in a phone interview. ‚ÄúThis verdict reinforces the substantial liability they are facing and it‚Äôs growing with each verdict.‚Äù

Kelly Leadem, a Boston Scientific spokeswoman, said the company disagreed with the jury‚Äôs findings that the Pinnacle inserts suffered from design flaws and that company officials didn‚Äôt warn about the implants‚Äô risks.

‚ÄúWe believe we have strong grounds to overturn the verdict on post-trial motions and on appeal,‚Äù she said in an e-mailed statement.

‚ÄúThe evidence we presented showed that the company completely mishandled this product, and I think the jury‚Äôs damage award reflects that,‚Äù Osborne said.

The women‚Äôs lawyers argued yesterday that Boston Scientific officials ignored internal calls for more testing of the pelvic-organ implant and hurried the device along to counter competitors‚Äô products.

In September, a state court jury in Texas ordered Boston Scientific to pay $73 million in damages to a woman who blamed one of its incontinence implants for her constant pain. That verdict was cut to $34.6 million by the trial judge. The company has won other cases that have gone to trial in state court in Massachusetts.

The Natick, Massachusetts-based company, the second-largest maker of heart-rhythm devices, faces more than 23,000 suits over its vaginal implants in U.S. state and federal courts, as well as in Canadian and U.K. courts, according to filings with the U.S. Securities and Exchange Commission. Boston Scientific pulled Pinnacle from the U.S. market in 2011.

Many of the cases against Boston Scientific have been consolidated before U.S. District Judge Joseph Goodwin in Charleston, West Virginia. Others have been filed in state courts in Delaware,New Jersey, Missouri, Texas and California.

Goodwin, who‚Äôs overseeing all the vaginal-mesh suits filed in federal courts against Boston Scientific, presided over the trial of the four women‚Äôs claims.

Women contend the inserts are made of substandard materials and often erode once they are implanted, causing pain and organ damage, and making sex uncomfortable.

The women‚Äôs lawyers presented evidence showing the mesh used in the Pinnacle insert hadn‚Äôt been approved for use within the human body by the company that made it.

Boston Scientific‚Äôs lawyer told jurors in the Miami case the mesh used in the inserts has been relied upon for years by doctors and engineers properly designed the devices.

‚ÄúThere‚Äôs no such thing as a risk-free surgery,‚Äù Hildy Sastre, one of the company‚Äôs lawyers, told jurors. ‚ÄúBecause somebody develops a complication, which they‚Äôve been clearly warned of, that doesn‚Äôt mean there‚Äôs a defect with the product.‚Äù

Boston Scientific is expected to face closing arguments Nov. 17 in another multi-plaintiff trial in federal court in West Virginia.

To contact the reporter on this story: Jef Feeley in Wilmington, Delaware at jfeeley@bloomberg.net

To contact the editors responsible for this story: Michael Hytha at mhytha@bloomberg.net Andrew Dunn, Peter Blumberg

What do I do if I am injured by a defective product?
VERDICT SEARCH REPORTS THAT THE PERSONAL INJURY ATTORNEYS OF DERRYBERRY ZIPS WADE LAWHORN, PLLC OBTAINED A WRONGFUL DEATH SETTLEMENT FOR THE INSURANCE POLICY LIMITS OF $1,000,000.00 WITH THEIR CLIENTS RECEIVING $555,494.39